We freeze the Top 100 LEADERBOARD Teams at a given interval and collect their information through Empires & Puzzles interface and place it in a data store. We understand that ranks can shift some during collection - still an excellent sample. Data Sampling will occur on regular basis (day) at a random time.

1) Top 15 Used Heroes (This does include duplicates on a team) Note: The D_Overall = the Defensive Grade.
2) 5 Stars Not Used (Not including 4*s because so few are used in this list. Their appearances are recorded in Report 8).
3) Top 5 Alliances (We sort them by Alliance name so only 1 is recognized if there is a duplicate at #5)
4) Most Duplicated Hero (A Hero gets 1 'vote' for each instance they are included 2 or more times on a players LEADERBOARD team)
5) Hero Pos Top 5 (ea Type) This adds the Left/Right Rear positions together, the Left/Right Flank positions together, and the Stand alone Center position. The Report then identifies the Top 5 for these 3 sets of data.
6) Hero Pos Top 5 (multi Type) This includes the Top 5 Heroes being used in more than one position - by the total in all Positions.
7) Which Heroes Had A Grade/GPA Change This identifies all Heroes who's Grading has improved or declined since the last data pull (Red=Decline, Green=Increase, Yellow=Just used as filler for change lines).
8) Top-100 EPIC Hero Appearances In regards to Rare Heroes - understand that our LEADERBOARD Statistics are pulled from the Top 100 LEADERBOARD teams so Rare heroes will never contain this section of the data. As of this time there are enough long term players of the game that they have a full 5 star team. This is true for the most part in regards to Epic Heroes as well - those that do appear - consider likely special (Kiril is one such Hero that has life after a players move into the Legendary player realm (for special purposes at a minimum). These Epic heroes are in report 8.

THE ULTIMATES: The Top 5

Gravemaker stays in the #1 position amongst the LEADERBOARD elite! 9 times in a row now! Alasie moves up a spot to have some one on one time with Gravy. Zeline steps down to positions 3. Sartana remains in position 4.

THERE WERE NO GRADE CHANGES THIS WEEK.

It is Dark Holy Week!

Joon lands at #12 he continues to land in this general area often.

Hel jointly takes position #13. She has strongly been revived - likely in response to being made available in the Atlantis summons

Drake Fong lands at #15 due to the tie between V and Hel.

It is hard to beleive it has only been 10 weeks! I have enjoyed it, both rewarding and very time intensive! Hero Utility - the DaRk VeRsIoN available through the month of October (or longer) - coming SOON!!!. - RaZoR


The Top-5 Alliance List is compiled weekly during the data extractions of the Top-100 LEADERBOARD players.

The following Alliances have the highest # of Cumulative members present through 9/29/18.

"Everyone has a need for a COMPACT VISUAL HERO LISTING that is updated regularly!

Totally missed out the first round!
Made sure I was ready for the 2nd.

I suspect many of you were completely caught off guard with the update on Monday Sept 24th? Power Changes! Deductions for the 4 and 5 Star Heroes and Increases for the 3 star Heroes (I don't follow 1 and 2 star). It was announced through the game interface and can be reviewed on the official SGG announcements at: Hero Powers Adjusted in Version 15.1 You can also access the screenshot I took Link to Screenshot.

No one that I play with understands the change, certainly not in any kind of positive light, and the reason given leaves much to be desired. I checked out the Forum right away and for the most part it was a room full of negativity. I understand staff justifying the change, however "players" that are justifying it - beware of them (our community was blind-sided - no excuse for that - there was no warning to me and I'm active). I don't want any part in that - so I have no idea how it ended. Coincidently, last week I had added the 8/31 SGG post to the site (on right column down further) - as I was EXTREMELY excited about the 'Ability to evolve heroes further'. They went on to say: We’re working on a new major feature that will enable all heroes to be developed beyond their current limits. This big feature is planned to enter beta testing soon.' YOU MUST KEEP THIS POINT, THIS FUTURE RELEASE IN MIND AS YOU READ FUTHER...

Given that information, it is possible that our Legendary and Epic Heroes just got POWER debuffed so that in the future ' Ability to evolve heroes further' release, we can spend time, resources and money (some of us do this) to get them back to where they were previous to this Power Change! LMAO if it turns out to be true. Honestly, who is going to focus on building Rare heroes? Very few, very few. SGG thought ahead! They needed to increase Rare Hero Power NOW! Because of the very reason no one is going to focus on them truly. Excellent planning to do it across the board for all! Out of the blue. Confusion. SGG also states in the short release article: 'The motivation for this change is to make the Hero Power reflect the actual power of the heroes more closely'. Ok... Trust me A 5* takes a -13 Power hit (that basically is the last 7-12 levels in the Legendary Heroes 4th ascension to FULL POWER - and REAL POWER) and a 3* gets a +9 Power increase? What was taken from the Legendary Hero in those 13 points, one could possibly argue cost more time and materials than fully ascending the 3* from start to finish! This in itself disputes that statement in my opinion, LOUD and REALLY CLEAR. Those of us playing for a while are aware what the cost is to fully ascend a Legendary Hero - to obtain those last 10 or so POWER points! It is extremely expensive! And some much worse than others - for example Joon vs Thoth-Amun (In short Joon is the big loser for cost of full ascension for the lower power obtained)!

The following statement was made in the Announcement: 'The change only affects the values of Hero Power - the actual effectiveness of the heroes is completely unaffected'. How does this tie in with the games definition of POWER (See the image excerpt directly from the game itself on the left - and REALLY READ IT - take it in before reading on). If this is NOT CLEAR to you then read it again, and again, and again. The point of levelling and ascension is to gain POWER!!! For your heroes to be as STRONG as they can be in battle! The primary purpose of this game - is to obtain your HEROES MAXIMUM POWER! Ok, so perhaps now we are on the same page of the purpose of this game? If so let’s take another look at the poorly drafted justification for their actions. I'm totally cool with giving them the benefit of a doubt - they may have had a PR guy go on vacation or this one wasn't feeling well or just filling in at a really inappropriate time. 'The change only affects the values of Hero Power - the actual effectiveness of the heroes is completely unaffected' Yes I did just restate a prior statment - its being addressed for Effectiveness this round. This statement contradicts the entire foundation of Empires! As per the following FACT: MORE POWER = MORE EFFECTIVE HERO. Any Crazy Player that wants to argue this point, easy test. Take a fully ascended team vs the exact team having each Hero 13 points from full ascension and run a simulation of 50 PVP matches of exact hero line-up/placement and boards. It wouldn't take long to identify under like conditions of a simulation which team was more EFFECTIVE. If I were consulting I would have advised SGG to DITCH the dialog that is accessible by clicking the power on the Hero card - some of us may have forgot about it. I suspect everyone is good with the factual points I've provided from the GAME itself.

Get ready to ponder this for a moment: Weren't we just stripped of the most expensive part of our heroes POWER? The last 12-13 POWER points! Yes gamers WE WERE. Anyone that states otherwise - I would suggest you no longer use them as a resource for this game.

I am NOT saying SGG's end-goal was specifically take what we earned and wrap it up just nice enough to entice us to earn it back again in a future release of the game (actually we would have NO CHOICE except to do so in order to remain competitive). Should that be the case (to some degree it has to be or entirely) and if they can get away with it - GENIOUS! Again it certainly appears to be part of it. We will be paying dearly to restore our Heroes POWER in the future release mentioned above - no matter which side of the street you are standing on. What I would like to know is how many Power points are they going to extend it beyond what they just took from us for this near future 'Ability to evolve heroes further' release? If it turns out to be NONE - expect a MOB! And the MOB RULES!

I gathered up most of the data immediately and am able to provide the following statistics. They are complete for Legendary Heroes, missing some info on Epic and Rare so I make inferences (take note of this point please).

MUSASHI was the only original 777 Power Hero that took a -13 hit. 3 of the 4 770 Power Heroes took a -13 hit (including Quintus - they really need to stop dinging that wizard). Misandra stays at the top of the POWER ladder at 774 with a -12 deduction (you can refer to the 1st image of this article above - it's just a sample of the data - posting it all would have been overkill). This article has turned into overkill!!! Sorry about that Guys.

In the end this is simply theorizing based on timing coincidences and logical assumptions. All which could materialize along the lines I described. The unexpected event on Monday was a shocker! The official announcement really doesn't have a leg to stand on given how drastic the action was. To avoid speculation such as mine and others in the future - I'm sure providing details, facts and some data examples would be sufficient to clear things up from the start. It is very possible SGG actually develops an entirely new pathway for us to achieve the 'Ability to evolve heroes further' that has nothing to do with the existing game play/options! This later case would likely be a hit with the games huge community. Thanks guys for making a great game and continuing to make improvements that matter now and again! Still a #1 fan! So if any of you staff members read this, just have fun with it! - RaZoR

NOW THERE ARE 18! Mok-Arr, I hear nobody wants you! No wonder you are so mad! Family Link's power is unique to the Season 2 Atlantis Heroes!

There are some slight discrepancies in regards to one’s ability to combine family members i.e. being that The LAGOON FAMILY has 8 members (which includes the only 5 stars) while The SAKURA FAMILY and ATLANTIS FAMILY only have 5 family members each.

This quick Reference is a fairly Large image file so that you can see the thumb nail Hero pics and clearly identify who the 5/4/3 stars are - or as E&P refers to it (‘Rarity’) and their Element. I ordered the Family's Heroes by Rarity then alphabetically by their name. You can click the image to enlarge it/save it. 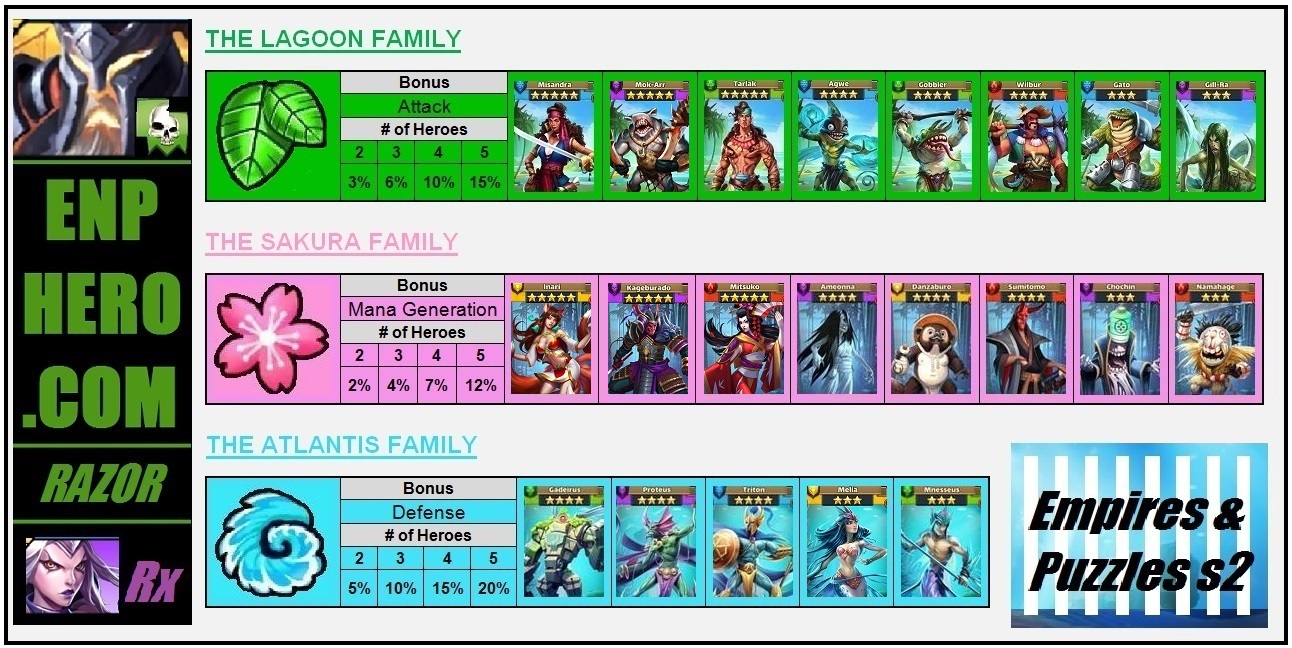